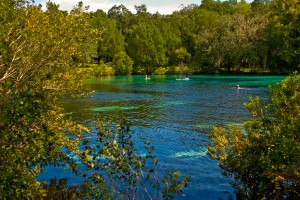 Image of Silver Glen Springs in the Ocala National Forest, from USFS

The Ocala National Forest is the oldest national forest east of the Mississippi River. Designated in 1908, the 607 square mile Forest sits on a series of ancient geological ridges between the St. Johns and Ocklawaha Rivers.

It’s the southernmost Forest in the continental U.S. and protects the world’s largest contiguous sand pine scrub habitat—one of the oldest ecosystems in Florida. These uplands provide key “recharge” soils that allow rainwater to percolate down into the soft limestone below. 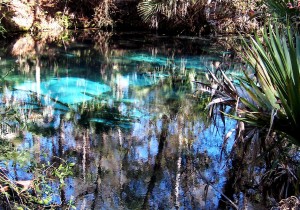 The softly rolling hills in this scrub are punctuated with 600 lakes and many springs, including Silver Glen, Alexander, Salt, and Juniper. Each of the springs is an oasis in the desert-like scrub, and is surrounded by subtropical hammocks of palms, bays, gums, maples and cypress. 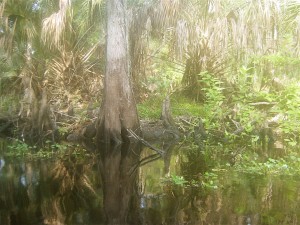 A classic subtropical shore along the Ocklawaha River

The springs with their transparent waters, turtles, and fish have long been favored by humans, dating to the Native Americans known as the Timucua who lived here for thousands of years. The mix of scrub, forest, river, spring and swamp nurtures many wild animals, including the largest population of Florida Black Bears.

The forest and its waters have a long tradition of engaging naturalists and writers, including William Bartram, poet Sidney Lanier, author Marjorie Kinnan Rawlings, and Archie and Marjorie Harris Carr. 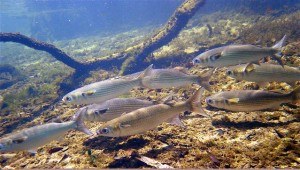 A school of mullet as seen through transparent spring waters

After visiting Salt Springs in 1774, Bartram wrote of waters as “transparent as the ether” populated with “innumerable bands of fish…some clothed in the most brilliant colours.” 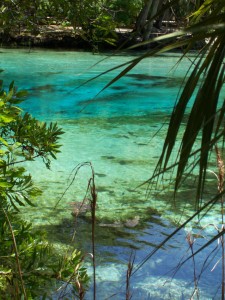 Sand pine scrub is one of the oldest ecosystem types in Florida. In ancient times when sea levels rose and inundated much of what is now Florida, these upland habitats were isolated by water, forming desert-like hilltop islands. During this period of isolation many species of plants and animals developed unique adaptations to the harsh, dry environment of the scrub lands. These rare and unusual species, called endemics, are found nowhere else in the world. Currently, from 40 percent to 60 percent of the plants and animals in scrub lands are endemic species—and some are so rare they are considered to be threatened or endangered. These resilient, persistent habitats are restricted mainly to Florida. 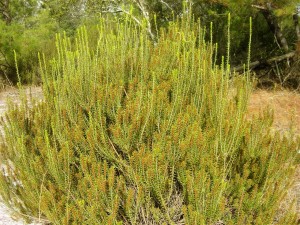 Wild rosemary is typical to the desert-like landscape of the dry, rolling scrub

Because scrub land is generally high and dry it is well suited for homes or agricultural uses. These prime lands have been developed faster than any other ecosystem type in the state. Over two-thirds of the original scrub land in Florida has already disappeared.  As a result of this rapid development, scrub habitat is considered to be the most endangered of the major ecosystem types in Florida.

Scrub ecosystems are a valuable natural resource, not only because they are an important habitat for wildlife but because they act as rainfall recharge areas for the limestone Floridan aquifer that supplies fresh water for drinking and which fuels our many springs.

Support our work at FOCC