Pre-restoration, the cabin in the brush

The photograph of the cabin as it was when was first donated to the USFS by Dr. Tom Carr provides a very vivid image of the “restoration” needed. As Dr. Ray Willis, archaeologist for the Ocala National Forest, noted: “I’ve never seen a structure in that shape still standing…It went through several hurricanes and didn’t fall down, though. It’s almost as if there was a reason it’s still here.”

The actual vernacular craftsmanship was provided by builder Jeff Penuel, and it restored the structure while also maintaining as much of the integrity of the original building as possible. The stabilization and restoration protocol was developed by preservation architect Herschel Shepherd, and was approved by Florida’s State Historic Preservation Officer Architectural Compliance staff.

Restoring the cabin required a very careful attention to details, and took into consideration the unstable nature of the entire structure.   Archaeologists Martin Dickinson and John Davidson of South Arc, Inc., Gainesville, Fla., coordinated with Jeff’s work on the foundation and subflooring.

With input from USFS Silviculturist Janet Hinchee, a loop trail was blazed behind the cabin as the Eagle Scout project for scout Harrison Booth. The trail, which explains the various habitats and plant communities, is now interpreted with signs designed and placed by Harrison as part of his Eagle project. And for those who need a place to rest along the trail—or simply to ponder what they have seen—a typically low-tech method was devised: Large hardwood log sections are turned on end to provide “contemplation rounds”.

We think that’s a grand idea that Archie would have surely appreciated—as he surely would have appreciated the big-hearted, generous donations that have really driven this restoration from the very beginning.

Here’s a short 12 minute film that Equinox Documentaries produced to help raise awareness and funding for restoration of the cabin.

If you’d like to download a .pdf file that contains extensive images and information about the restoration project, please click here – CarrCabinRestoration2007to11.pdf and view in your browser or right-click and save the file to your computer. (***NOTE:  This file is a large file, approx. 8MB in size)

Please enjoy this gallery of images from the restoration process: 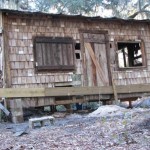 Before more intensive restoration could be accomplished, Jeff had to “levitate” the structure and remove the entire rotten subfloor and foundation. The new subfloor was built to code, using treated pine lumber via the stabilization protocol developed by renowned preservation architect, Herschel Shepard, and approved by Florida’s SHPO (State Historic Preservation Officer) architectural compliance staff. 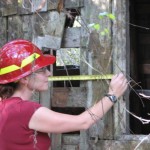 Carefully documenting the size of the cabin before actual restoration begins. The intent has always been to sustain as much of the original integrity of the cabin as possible while also using vernacular craftsmanship. 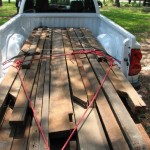 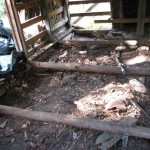 In 2009, there were some 13 42-gallon-size sacks of rodent debris removed from under the original floor boards. This included 70 years worth of wood rat skeletons, litter, and assorted waste. 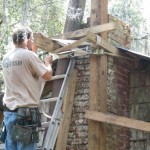 Craftsman Jeff Penuel secures timber “strong-backs” to the dilapidated chimney prior to “righting” and stabilizing it. Jeff’s knowledge of Cracker-style carpentry and his generous donation of his time were invaluable to the restoration. 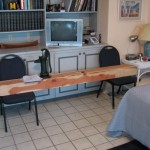 A custom-cut cedar mantle was donated by Bobby Ross of Suwannee River Woods, Fanning Springs, Fla. to replace one that had been stolen from the cabin. The pitcher pump was donated by Tom Carr. 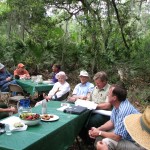 Many generous folks came together to provide valuable input for planning. Here, Dr. Tom Carr (in white hat in middle) chats with Dr. Ray Willis during one session outside of the cabin. Before it was over, other Carr family members, USFS personnel, preservation experts, vernacular craftsmen, historians, Boy Scouts, filmmakers and others pitched in. 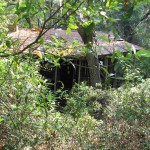 Pre-restoration, the cabin in the brush 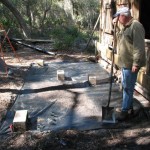 According to protocol, archeologists Martin Dickinson and John Davidson of South Arc, Inc. of Gainesville, Fla. coordinated with Jeff’s work on the foundation and subflooring. Here, Martin looks on after the excavated porch area was screened with landscape fabric. All of South Arc’s important work was also donated.

Support our work at FOCC